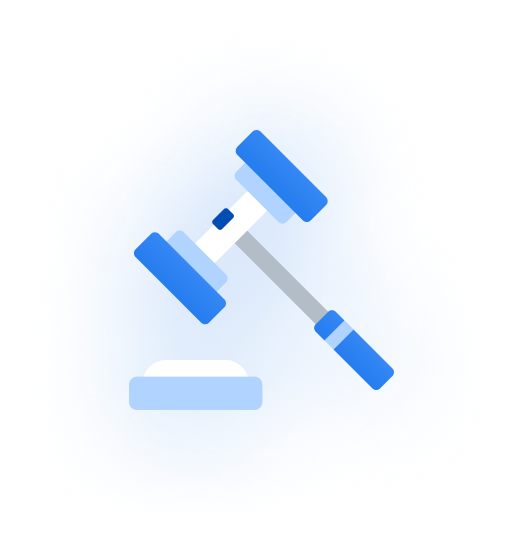 Is the Autenti e-signature valid and effective?


In accordance with Polish and European law, an effective conclusion of a contract does not necessarily require a classic signature on paper, unless there is an explicitly indicated exception provided for by law. Pursuant to Article 60 of the Polish Civil Code, in order to make a declaration of intent, it is sufficient for a person to act in any way that sufficiently reveals his or her intent, also including the also by disclosure ofing the intent in an electronic form.


The Autenti platform offers both the possibility of using the documentary form (electronic signature / Autenti e-signature) - that is, one that sufficiesis sufficient when the law does not require a specific form and the electronic form (qualified electronic signature), if a written form is necessary for the validity of a given transaction.


An electronic signature submitted under a declaration of intent always ensures preserving the documentary form, which allows for the effective conclusion of the majority of contracts functioning in economic trade.

Are the services offered by Autenti legal?

Autenti provides trust services pursuant to Regulation (EU) No 910/2014 of the European Parliament and of the Council of 23 July 2014 on electronic identification and trust services for electronic transactions in the internal market and repealing Directive 1999/93/EC, hereinafter referred to as eIDAS, as well as the Act of 5 September 2016 on Trust Services and Electronic Identification.

The Autenti platform may also be used to process documents in processes for which it is necessary to meet the requirements of the Polish Financial Supervision Authority (in particular, the Communication of 23 January 2020 on the processing of information by supervised entities in a public or hybrid cloud).

Can documents signed with an e-signature constitute evidence in court proceedings?

Confirmation of signing a specific document issued by Autenti (in the form of a Signature Card) is a document issued by a trusted third party, and at the same time a trust services provider, which can be used as evidence in court proceedings for: signing the document, its content, date on which the signatures were placed. Moreover, the parties are able to show whether there has been an unauthorized and unlawful change (modification) of a given document, or whether it retains its integrity.

Is Autenti a trust service provider?

Autenti provides trust services on the basis of the Trust Services Provision Policy, which defines the types, rules and conditions for their provision, in accordance with the eIDAS Regulation, as well as the Act of 5 September 2016 on Trust Services and Electronic Identification. Autenti is included in the list of Non-qualified Trust Service Providers kept by the National Bank of Poland at the request of the minister competent for computerisation.

Does Autenti guarantee the integrity of signed documents?

Securing the authenticity and integrity of the document content is the core functionality that distinguishes the innovative Autenti technology from other solutions available on the market. Signing on the Autenti platform takes place in a strictly defined process, in which, from the moment the document is sent to the end of its signing by all required persons, it is stored and made available to authorized persons using advanced IT mechanisms. The applied security measures make it impossible for the content to be changed unnoticed.

In order to confirm the securities process, Autenti uses electronic seals based on a qualified certificate, which are placed on the document immediately after its sending and after the signing is completed, and enable, using an additional visual layer of the Signature Card and a technical one of the file, to clearly define the signatures affixed, without changing the document made available to its signers. The electronic seal used, verified by a qualified certificate, meets the requirements of Article 36 of eIDAS, in particular, it is linked to the document in such a way that any subsequent change of the data is automatically recognizable.

For example, opening a document signed in Autenti in the Adobe Acrobat Reader application verifies whether any changes have been made to the sealed document or not and, in the event of such changes, it clearly informs about them. Each document signed in Autenti is additionally marked with a qualified electronic time stamp, which not only guarantees the integrity of the document, but also provides for the presumption of the accuracy of the date and time it indicates.

Can Autenti provide services in the banking outsourcing regime?

Autenti may provide services in a manner consistent with the requirements of both the Act of 29 August 1997 – Banking Law and the Announcement of the Polish Financial Supervision Authority regarding the processing of information by supervised entities using public or hybrid cloud computing of January 23, 2020. The service is provided based on an individual agreement.

Autenti is a trust service provider based on European standards

AUTENTI IN THE REGISTER OF TRUST SERVICES

As a trust service provider, Autenti guarantees compliance with eIDAS

As a ‘trusted third party’ we provide evidence of the signing process in the form of a Signature Card.

The Signature Card is an additional page generated at the moment of sending the document for signature, attached to the source pdf file, thanks to which it is possible to show who, when and from what device (IP) placed an electronic signature on the document. The Signature Card shows all the data that was used to create an electronic signature. The signatures are listed chronologically. 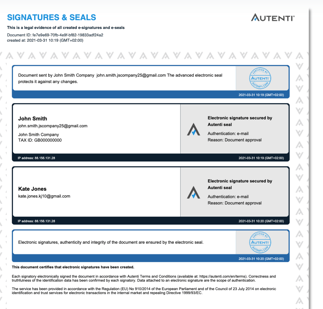 The Signature Card contains, as part of the visualization, the fields informing about:

e-signature in the European Union

Depaperisation of everyday business and consumer relations of our customers is the main focus of Autenti's operations. We support, educate and advise. Below there are some important points that will help you understand the world of electronic signatures.

§ What is an electronic signature?

An electronic signature on a document becomes valid upon its submission.
There is no European law that requires signatures to always be affixed on paper, nor does it discriminate against or deny the validity of electronic forms.
According to the Polish civil law: ‘Subject to the exceptions provided for in the Act, the intent of a person performing a legal transaction may be expressed by any behaviour of that person that reveals his or her intent in a sufficient manner, also including  the disclosure of the intent in electronic form’ (Article 60 of the Polish Civil Code).
It is worth noting that only a few types of documents require a special form, and even when they do require such a form, a failure to comply with it does not always invalidate the given signing act. It is also worth remembering that even if a written form is required for the validity of a given act, it can be replaced with an electronic form by affixing a qualified electronic signature under the document (compare 781 § 2 of the Polish Civil Code).
§ What are the types of declarations of intent and for which an electronic signature can be used?

A written or an electronic form is required only in cases strictly reserved by provisions of law. The lack of such a reservation allows the use of any form, however, for evidentiary purposes, the desired form of legal action is the document form, to which the Autenti e-signature applies.
In accordance with the Polish legal order, we distinguish:
§ What is the difference between the written and documentary form?

The electronic form is equivalent to the written form.

The documentary form consists ofin submitting a declaration of intent in the form of a document, in a manner enabling the identification of the person submitting the declaration.

The Autenti e-Signature meets the standards of electronic signatures used all over the world!

e-signature in the world